Blessed Are The Persecuted

When I read the book of Acts and other accounts of the early Christians,

I am struck by the boldness of believers in the face of such terrible persecution.

They would not stop preaching Christ and Him crucified,

and thousands were added to the faith daily.

Indeed, as Tertullion said, “The blood of the martyrs is the seed of the church.”

The early Christians would not back down and deny their faith,

despite the fact that they knew it was likely to lead to martydom. I still remember touring the catacombs in Rome with my parents when I was ten, with my dad telling me that is where the Christians hid and continued to worship.

I marveled. I believe it was for me one of the seeds that eventually burst into faith. Colin Smith says conservative estimates show 4,000 believers dying for their faith yearly today. Mindy Belz, of The World and Everything in It, says the press is simply not reporting it. Tim Keller says that Christianity moves away from wealth, and the Christians in our wealthy land feel self-sufficient so passion is lacking. So many of our churches and believers are lukewarm. Colin Smith wrote:

When God’s people are cold, confused, and compromised, reflecting little of their Father, the world will often ignore them, but when Christians get serious about pursuing righteousness, mercy, purity and peace, they will get under the skin of godless people and find themselves facing trouble. Why? 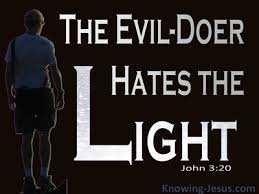 We do have mild persecution here. We may be scorned, or lose our jobs, or our liberties if we are truly living for Him. Persecution for righteousness sake is a result of living out the Beatitudes. I have experienced mild persecution, and even mild persecution hurts and in it I must remember the promises in the Beatitudes of how God looks with favor when we don’t shrink back as victims, putting our light under a bushel.

Last year I was excited to bring my book “Idol Lies” to a small group of men and women, for in the past it had always been received well and we saw major life changes. But this time there was a very vocal dissenter. Each week he had a new strong objection: He felt the topic was just for women, he didn’t like to study passages in the Old Testament, he didn’t like word pictures — but the hardest week of all was when we delved into the good fruit suffering could produce. I shared how my children and I had grown through Steve’s death. He was enraged! He had suffered a lot, and he felt nothing good had ever come out of it.  The whole session was dominated by his anger and I went home and wept.

This is mild persecution compared to what happens in many countries, yet it still hurt. But I also could see that my battle was not against flesh and blood but against the rulers of darkness. That helped me have compassion on this man and stay the course: returning good for evil, love for hate, and truth for lies. It wasn’t easy, but the promises of Jesus to remain true in the face of persecution helped me so much. And a dear man in our group told me, “I pray for __________ every night, that Jesus will turn his heart of stone to a heart of flesh.”

This week we will see how if you are truly living for Christ, you will suffer, and if you aren’t suffering, you are not living godly, you are not letting your light shine, or you are not sharing the good news of the Gospel.

And to those who are suffering, you will see why you can rejoice and be so glad.

Monday: All Who Live Godly Lives Will Be Persecuted

Colin Smith says there are two kinds of persecution: of the hand and of the tongue. In the Western world it is still primarily not physical, but verbal. We are scorned, insulted, and maligned. A. What does this verse say?

B. If you are not suffering, ask yourself these questions: Am I living godly? Am I dying to self? Am I winsomely sharing my faith with others?

C. How have you suffered persecution and what has been your response?

4. How have you seen God at work in your life recently?

Tuesday: Blessed Are You If You Suffer For What Is Right A. What promise does Jesus give the persecuted?

B. How is this Beatitude different from the others?

Recently we discussed sharing our faith in our home church of The Orchard. Many are sharing, and are doing so gently, but still have suffered rebuke and insults. One man grieves that his son and his wife will not allow them to share with their grandchildren. One woman, when she invited a neighbor to our Christmas Tea was coldly told, “We are not THOSE kind of people.”

All this hurts — and it is persecution. Peter tells us that we suffer, it should not be for sin (or for being obnoxious) but for doing right, for gently speaking the truth in love.This is such an important passage.

7. Is God speaking to you through any of the above. If so, how?

In the rest of the world, missionaries often face extremely hostile situations and must decide whather God is calling them to stay or flee.  A movie that was so stirring about this was Of Gods and Men. Here’s the trailer:

Godly people have made both choices — and we must listen to the Spirit in such cases and to the strength of our hearts.

In the Western world it may involve giving up a job in order to maintain your Christian principles or fighting to change their policies.

Sometimes it is the choice to keep sharing our faith or to move to more fertile soil. I was in a summer book club with many wealthy women who had summer homes on my road, but in fifteen years, though I read many of their choices that were hostile to Christianity, they would never vote for my choices. I could handle their subtle shunning, but I finally realized I was scattering seed on cement. The Spirit led me to move on.

7. Why did most of the believers flee after the stoning of Stephen? (Acts 8:1-2) What good came from that?

8. Why, despite opposition, did Paul decide to stay in Ephesus according to 1 Corinth. 16:8-9? What good came from that?

9. Challenge Question: The following two verses may seem like a contradiction.

C. How does you resolve the apparent contradiction?

D. How do you know whether to shake the dust off your feet or keep sowing your seed?

10. Have you been kissed by the King recently? If so, how?

11. We finished the Momentum series last week, but Keller has a great sermon on the final beatitude. Listen and share your notes and thoughts.

12. Name two particular Beatitudes that are impacting you and why.

We are going to continue in The Sermon on the Mount next week with a new study.  Next week I’ll send out a letter in hopes you will pass it on to friend. My plan is to keep the homework reasonable as I know many of you are beginning fall studies. The Sermon on the Mount is so rich, we will move through it slowly, taking Matthew 5 up to the holidays.