IS HE SWEETER THAN HONEY TO YOU?

LAST WEEK I WAS WITH CHRIST’S BEAUTIFUL BRIDE

THE CORDS OF DEATH ENCOMPASSED EACH ONE,

HE RESCUED THEM FROM THEIR STRONG ENEMY

AND THEY ARE SO GRATEFUL.

EVEN IF THEY NEVER GET OUT OF PRISON 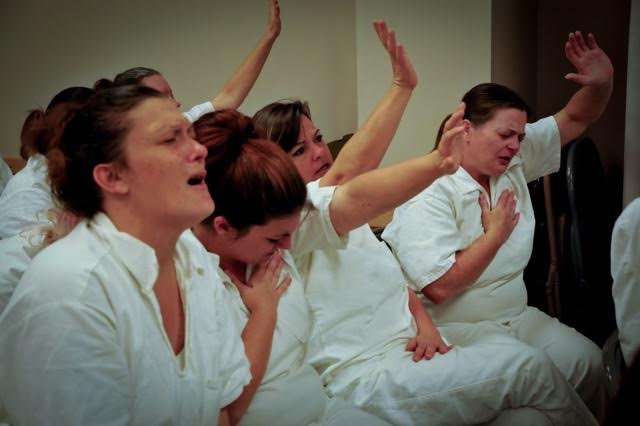 SUCH A CONTRAST TO MANY OUTSIDE THE PRISON

WHO MAY THINK THEY KNOW HIM,

BUT THEY HAVE RELIGION RATHER THAN RELATIONSHIP

AND ONE DAY JESUS WILL SAY,

I NEVER KNEW YOU.

THE SONG OF SONGS IS A WARNING:

ONLY CHRISTIANITY HAS A RELATIONAL GOD.

OTHER RELIGIONS HAVE A MONOLITHIC GOD OR WARRING GODS.

CHRISTIANITY HAS WHAT THE EARLY CHURCH FATHERS CALLED

With eyes shining, she said, “When you have done something like I have done and you are completely forgiven, there is a joy that has no lid.” She gave my friend Linda Strom the dream of discipling women in “faith dorms” right inside the prison and Discipleship Unlimited was born. Women who profess faith are accepted into these dorms 18 months and then return to the general prisons as missionaries. Not everyone accepted into the faith dorms are true believers, for sometimes it is hard to discern who are really His, especially if they know the “right words.” And yet God is sovereign, for even those who get in who are just “religious” and don’t really know Him, almost always come to really know Him. The living faith of the others is contagious. It is contagious to me — I so often feel lukewarm in comparison to them. I wonder, Could I lose everything as they have and have this kind of joy? (So many of them, I am convinced,  will be in the front of the line in heaven, but I will be grateful to be a doorkeeper!)

Last week for the first time I went into the high security prisons — outside of the faith dorms where many do not know Christ. First we went cell to cell in “Cell Block One” where they are only allowed out of their cell one out of every twenty-four hours. About half of the women wanted nothing to do with us. I was contemplating why as some turned their backs to us, for I would think they would be so thankful for human contact. Why, Lord? Then He brought to my remembrance how our daughter Beth was when we tried to reach out to her after adopting her. She’d had twelve years of abuse in Thailand and had built a wall so as not to be hurt again. It took lots of time and lots of love for that wall to come down at all.

After that we were in an open room where “Cell Block Two,” a group considered a bit lower risk, were allowed to get out of their cells for two hours to come to “church” in a nearby windowless cement room. Yet when they filed in, many were expressionless, silent — like stones. How could we reach them? Then, as only God can do, He led me to depart from my script. I began by telling them the story about my daughter Beth. How as a newborn her arm had been cut off by those who were supposed to take care of her. How she had been cast in a field to die. How she was found crying and rushed to the hospital. How in the orphanage she had been abused in every way. She had what experts call “attachment disorder.” She didn’t trust anyone, didn’t want to attach to anyone, even those who loved her. When we tried to hug her, she jumped. She pulled her covers over her head when we went in to tuck her in.

I had their attention. I saw a few tears. Thank you, Lord, I breathed.

I told them that is what Satan wanted for them. To make them believe God wasn’t good, couldn’t love them  — so that they would not attach to God. I told them He was waiting for them with open arms. He wanted to “kiss them,” to  be their “good, good Father,” to be their “true Husband.” He wanted to heal them, to love them, to make them His own. Before my very eyes I saw the Spirit of the Living God melt them. Many of them have been so hurt, not only by childhood abuse, but by religion. Some “ministers” who come into the prisons shake their fingers at them, condemning them with religion. Religion kills but relationship brings life. That life giving gospel is what Discipleship Unlimited, the ministry I am so privileged to be a part of, brings to these women. And the women in their faith dorms are brimming with life.

To prepare your heart, watch this interview of Karla, the one whose dream we are seeing lived out, speaking about how forgiving others causes you to soar:

This is our last week on the introduction to the Song (and I know it has been a long introduction!). Next week , with the beginning of Lent, we dive into The Song chapter by chapter during Lent. I suspect we will have newcomers who will need mentors — and I’m counting on you to be there for them. You have been so wonderful that way! I cannot thank you enough. I also thank you for your input. I’ve changed so very much in these opening chapters because of you.

2.  How would you characterize the difference between relationship and religion?

After my time in prison, I spent a day with my sister Sally and her husband John, for they live in Austin. John was a Lutheran minister and a professor at a Christian college when he was introduced to “Alpha,” an evangelistic Christian ministry. Alpha began in England and spread like a wildfire throughout the world, quickening souls in sleeping churches. John was highly critical of Alpha, and thought, This curriculum could be so much better. So John rewrote Alpha and sent it to the leadership of Alpha in England. Then he called them. A godly leader came to the phone and listened patiently to John. When John paused, he said:

“Frankly, sir, we have looked at your materials and you don’t get it.”

“Go back and watch the Alpha videos again. This time, don’t watch them for others, or with an eye to change them – just watch them for your own heart. Ask the Lord to help you see.”

John was shocked, but thankfully, humbled. Had he really missed something? He began watching the videos again. As he was listening to Nicky Gumbel winsomely share story after story about the reality of God moving in his life, John thought: This guy really believes this stuff. When he got to about the sixth video, he said, “everything that was in my head dropped to my heart.” He wept to experience the love of God and he wept for the years that he had shepherded others without really knowing God’s love. John went on to resign from his teaching position in order to be trained in England for six months by Alpha to take it to North American campuses.

There are so many like John. During The Great Awakening when a high percentage of the population was supposedly turning to Christ, Jonathan Edwards, the American puritan of keen intellect, was concerned. Edwards said, “No matter how much people may know about God and the Bible, it is no sure sign of salvation.” Unless we have tasted the goodness of the Lord, it may only be a creed in our heads. Edwards felt the Song was key in helping people see what Christianity truly was: relationship, not religion. In the Song, Edwards wrote, the “bride is incessantly infatuated with Him.” Edwards said “There is a great difference between knowing honey is sweet and having a sense of its sweetness.” How do we reach those who think they know, but do not? Jesus often used the power of a story to quicken hearts. And that, I am convinced, is why we have the Song. To learn that Christianity is not rules but relationship — the most intimate relationship.

3. Comment on the above. (Could I make it clearer — better?)

4. How have you experienced the love of God in the last week?

B. How were they different?

C. Challenge Question: The word translated “knew” is the same word that God uses to express sexual intimacy between husband and wife. What does this tell you?

6. As an overview, and to prepare you to be mentors for Lent, we will read the whole Song this week and have you summarize the three love stages.

A. First Love — that wonderful euphoric time when you first fall in love. James Hamilton, whom you will hear this week says the Shulammite often imagines the time when love will be consummated, but it hasn’t happened. One evidence is that the Daughters of Jerusalem are present. Read about the first love time in Song of Songs 1-4. (There are moments of cooling even within this time, but basically she is in the first love time.) Summarize what you see.

B. Wilderness Love — that time when you withdraw from your bridegroom, not trusting him or longing for him as you did at first. Pain follows. Song of Songs 5:1-8.

C. Invincible Love — that time when even though there is pain, you trust the heart of your bridegroom and see fruitfulness in your life and in the lives you have touched. Song of Songs 5:9 to the end.

Thursday-Friday: Listen and Comment on this Sermon (2ND WEEK FOR THIS)